Since the separation of the lower-limb impairment classes ahead of the 2014-15 season, the USA’s Nicole Roundy has really come into her own.

The 29-year-old cemented her status as one of the world’s best riders at the 2015 IPC Snowboard World Championships in La Molina, Spain, with two bronze medals in snowboard-cross and banked slalom.

In 2015-16, the Paralympian once again ended second to Hernandez Cervellon in the overall rankings, but won the snowboard-cross for the first time and finished second in the banked slalom. She is hoping to finally overtake her main rival in the next season.

Roundy is also a trailblazer. In 2006, she became the first above the knee amputee, male or female, to compete in Para snowboard, eight years before the sport made its debut at the Sochi 2014 Paralympic Winter Games. Her efforts made a significant contribution to the sport’s case for inclusion.

She lost her right leg to cancer at the age of eight and is an accomplished motivational speaker, who holds a degree in business management. Roundy is an advocate for The Challenged Athletes Foundation, The National Ability Centre and childhood cancer research.

Roundy will be amongst the more the 100 athletes competing at the 2017 World Para Snowboard World Championships in Big White, Canada.

When and where did you begin this sport?
She took up Para snowboard in 2004.
Why this sport?
She discovered snowboarding after first trying skiing. "Snowboarding has taken a priority in my life because it has allowed me to dream and achieve. It has given me a new passion for life and taken me down roads I never thought I would have the opportunity to travel."

In June 2006 she crashed her dirt bike and shattered her left knee. She was told she would not be able to snowboard for a year but she returned to the slopes after five months. (teamusa.org, 14 May 2013)
Sporting philosophy / motto
"Showing up is half the battle - not just physically, but mentally." (Athlete, 17 Jun 2016)
Impairment
In 1994 she was diagnosed with osteogenic sarcoma, a form of bone cancer. Later that year her right leg was amputated above the knee, and she continued aggressive chemotherapy treatment. Her heart stopped twice during her treatment period. (Athlete, 20 Nov 2013; teamusa.org, 14 May 2013; nicoleroundy.com, 01 Jan 2012)

Nicole Roundy: My best and worst 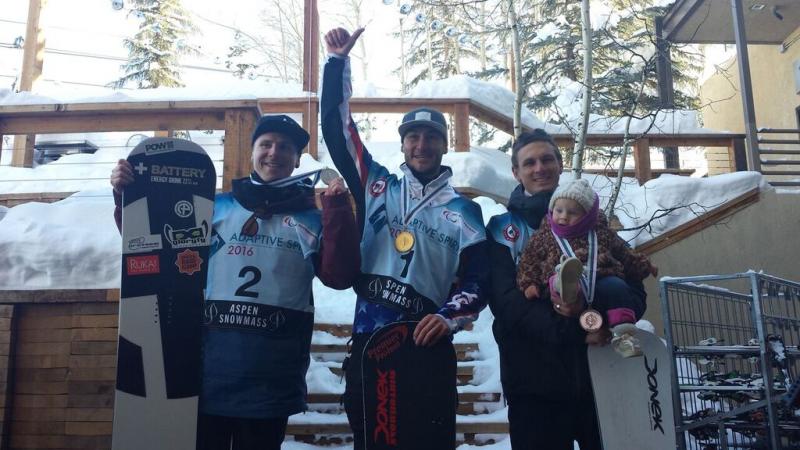