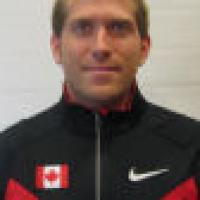 When and where did you begin this sport?
He took up in athletics at age nine.
Why this sport?
"I was inspired by Rick Hansen [Canadian Paralympian], and the Manitoba marathon went past my house every year. Top athletes from all over the world would show up in Manitoba."

He received an Order of Sport Excellence award in 1996, 2004 and 2008. (Athlete, 30 Aug 2012)
Famous relatives
His grandfather won an Order of Sports Excellence award in his home province for lawn bowls. (Athlete, 30 Aug 2012)
Impairment
He was born with spina bifida. (winnipegfreepress.com, 13 May 2013)
Other information
OCCUPATION
He runs Colin Mathieson Consulting, which offers wheelchair users assistance through mobility devices, recreation equipment, home modifications and discharge planning. He also work as a rehabilitation consultant for Independence Inc. in Winnipeg, MB, Canada. (LinkedIn profile, 01 Apr 2016)

OTHER STUDIES
He has studied social work studies at University of Manitoba in Winnipeg, Canada. (Facebook profile, 05 Jan 2017)