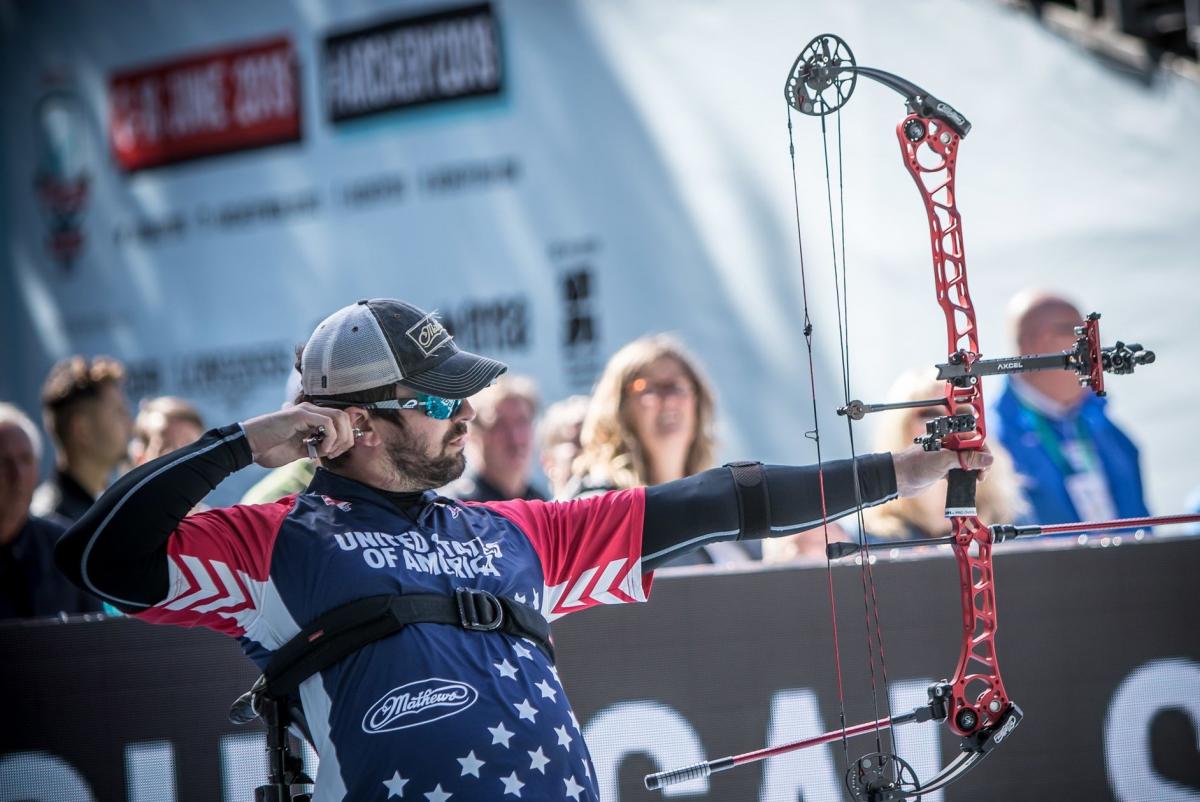 “Just numb. I’m just completely numb, it’s just an incredible feeling. It really is. I was a little quick on it. It’s hard to black out. I knew kind of where the match was and so that last shot, instead of waiting I got a little impatient.”

Thompson was the best archer in the arena throughout all of Saturday’s W1 and compound finals. While others seemingly struggled with the conditions, the 36-year-old returning bronze medallist looked comfortable.

His arrows landed in the middle, too.

He dropped his third and ninth arrows into the nine – but through 14 arrows, that was all that escaped the 10-ring. And his 30s in the second and fourth ends made a convincing case that Thompson deserved the world title.

As did the scoreline.

With an arrow to spare, Thompson already had the title, 138-135. He flung his last arrow wide left in the eight. It didn’t matter.

“I was a little quick on it. It’s hard to black out. I knew kind of where the match was and so that last shot, instead of waiting I got a little impatient,” he explained.

Thompson took the match, 146-135, and by doing so secured the USA a third spot in the compound men’s open competition at the Tokyo 2020 Paralympic Games [the world champion’s nation has its maximum quota increased by one].

“I'm very happy because two years ago, at the world para championships in China, we lost the match by only one point,” said Nori. “This time we decided we were going to get the gold medal.”

But then the Turkish squad did the same in the second, giving Iran an easy chance to recover – and even take the lead, 109-108, at the halfway point. They were tied after 18 arrows, as well, 165 points apiece.

“In the first end, because of the windy and rainy weather, we couldn't aim very well. But after that, we said we had to win gold. We had to adapt to these conditions,” said Nori.

“I am really grateful to win a second gold medal in one day. I want to thank my coach and my teammate. He was absolutely fantastic in the competition,” said Zhou Jiamin, the Rio 2016 Paralympic Champion who shot in both of those events.

The 2019 World Archery Para Championships finishes on Sunday in ’s-Hertogenbosch.