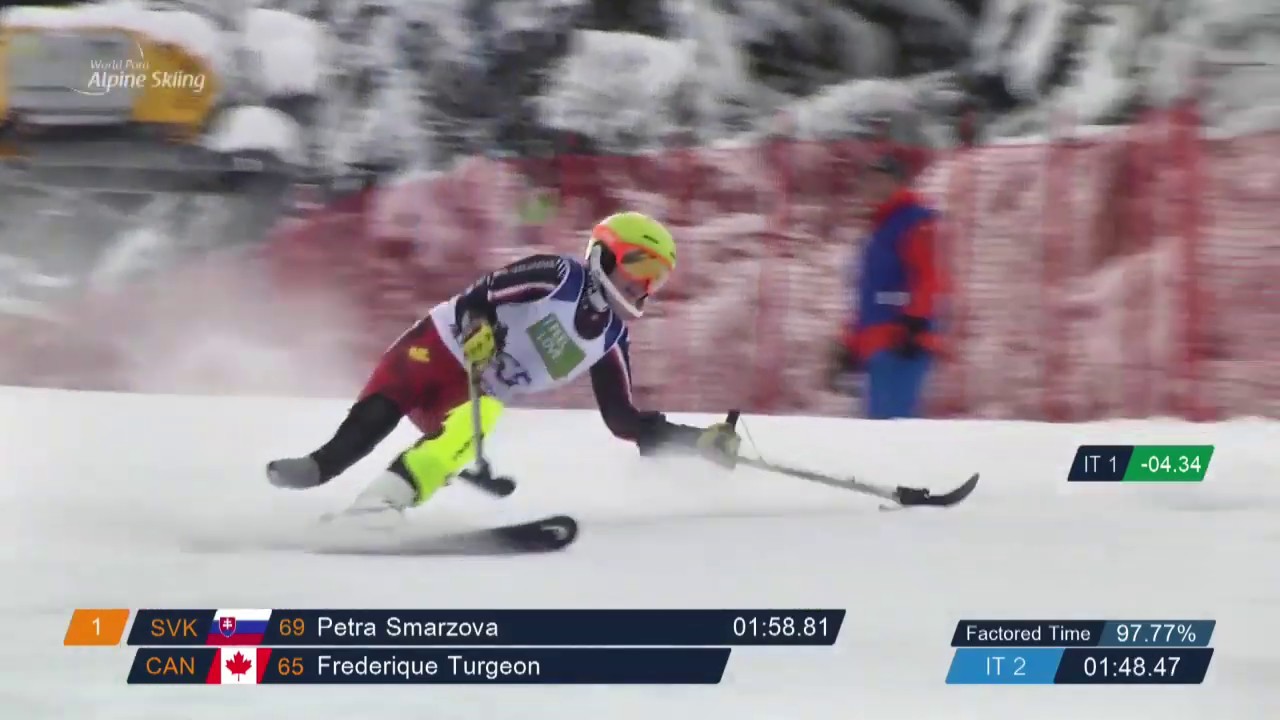 “Skiing connects me to my dad. So when I’m skiing, I’m with him. I’m thinking a lot about him and I do miss him a lot, but at the same time I feel happy to be here and just skiing for him and with him in my thoughts. It’s hard, but I’m strong. I can do it.”

It was a moment for the family photo album - Canadian Para alpine skier Frederique Turgeon slumped on one knee at the finish line of her first World Championships, exhausted and emotional, as she realised the enormity of what she had just achieved.

A month ago, Ronald Turgeon passed away unexpectedly and since that day, his daughter has embarked on a mission to honour his legacy, culminating in the silver medal at the 2019 World Para Alpine Skiing Championships in her father’s favourite skiing discipline.

A different kind of Christmas

Turgeon inherited her passion for skiing from her father who first put her on skis at the age of three. As she went on to compete, Ronald became her biggest fan. He got up in the middle of the night to watch her race around the world and cheered her on from the stands in PyeongChang when she competed at the 2018 Paralympic Winter Games.

With Turgeon travelling with the national team for training and competitions, her time at home became a rare treat, but in December she finally made it back to Montreal for the holidays.

Ronald picked his daughter up at the airport and as they drove home in the late evening, they talked about her upcoming races and going skiing together in two days. After a family dinner, Turgeon went to bed and when she woke up, she discovered that her father had passed away in his sleep from a heart attack.

With her father dying a week before Christmas Day, the holidays took on a sombre mood, but the always optimistic Turgeon saw it as a blessing in disguise.

Best decision of a lifetime

It was at this point that Turgeon had what she described as “the best decision I ever made”. Instead of slowing down and submerging in grief, the athlete picked up her skis and flew to Zagreb, Croatia to compete at the season’s first World Cup.

It had only been four weeks since her father’s death, but Turgeon was determined not to miss the competition that they had talked so much about.

“My dad loves slalom so he was very excited for the possibility of me going to Croatia and maybe getting a medal because I was pretty strong throughout the year,” she said.

“We talked in the car about the upcoming trips and when he died, I was like, ‘Hey, you know what? I’m going to go get some medals’.”

She did just that, winning both women’s standing slalom races in Zagreb in mid-January and taking a dominant lead in the World Cup standings.

Turgeon was the only Canadian athlete to compete at the World Cup in Zagreb, and the solitude was a welcome state for the young skier.

“I needed some alone time before going back with everyone,” Turgeon said. “I do need to cry some days and I didn’t feel very OK with crying in front of everyone, so I think it was great that I had a couple of days by myself in my own little room, in my own little space just to deal with competing and my dad’s death.”

The time of solitary reflection paid off for Turgeon. She was fourth after the first run of her signature slalom at the 2019 Worlds, but her second run was pure heart and magic.

“I gave everything I had. When I was going down the top part of the course, I was kind of out of control. My helmet was all over the place, super crooked, and everything was just so bad, but I was still skiing and I was still on the course, so I was like, ‘OK, just finish the course. It has been crazy that you went through all of that. You can get to the bottom and maybe on the podium. Just get there’. So that’s what I did,” Turgeon recalled.

She waited nervously at the finish line as the top three girls of Run 1 followed.

“In my mind I was like, whatever happens, I’m very proud of my second run,” Turgeon said. “And then Alana made that mistake, but she was still in the green as she went down for the intervals and as she was going down, it was like green, green, green.

“As she crossed the line, it was quite close on the times too, and I didn’t realise it yet but the French team was like ‘Yeah!’, and I was like, ‘Wait, you’re cheering for Alana? OK’. And then I looked at the time and I saw that I was on the podium.”

After her winning run, Marie Bochet sprinted to Turgeon to give her a hug. The French champion had met Ronald Turgeon in PyeongChang and was among the first to learn about his death.

“She was very happy for me and as we were hugging she said, ‘I know your dad must be so proud right now’,” Turgeon said. “I was crying.”

“Skiing connects me to my dad,” she said. “So when I’m skiing, I’m with him. I’m thinking a lot about him and I do miss him a lot, but at the same time I feel happy to be here and just skiing for him and with him in my thoughts. It’s hard, but I’m strong. I can do it.”