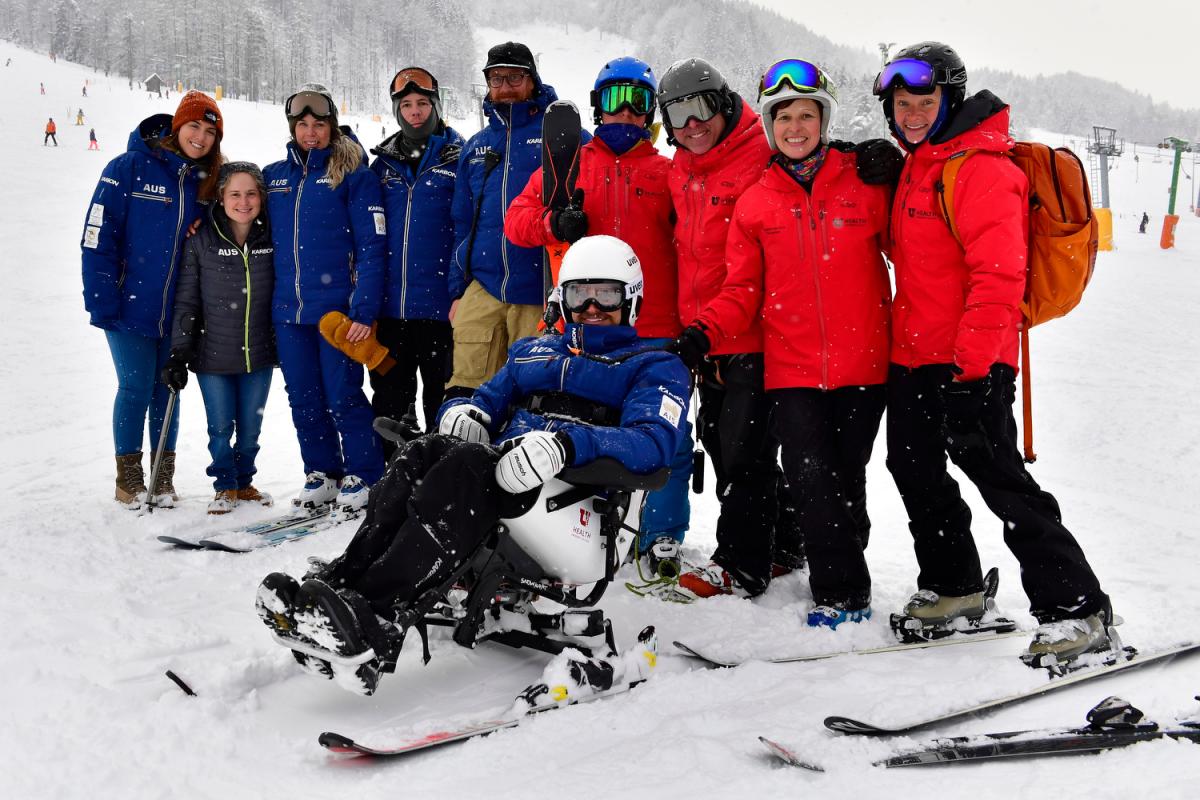 “I’m over the moon when my athletes win. We’re all ski racers at heart. We came from ski racing and we have that competitiveness. That’s what we like, and when your skier stands on the podium it’s like yes, yes, yes! It is such a rush.”

Down on the concrete slabs of the underground parking of a hotel packed with Para alpine skiers, burly men in aprons are hard at work with the smell of melted wax lingering in the air and drilling noises cutting through the pounding rhythms of a boombox.

As the athletes eat, sleep and relax before the big race on the floors upstairs, the ski techs are in their busiest hour making sure their team’s medal count at the 2019 World Para Alpine Skiing Championships is as high as possible.

The diligence of a ski tech can be the difference between a gold medal and finishing off the podium, especially in the speed events, and nobody is willing to take any chances.

It takes about two hours to prepare each set of skis and athletes have at least two sets for each event they compete in.

For the Great Britain team, which has seven athletes and six support staff at the 2019 Worlds, this means carting around 82 pairs of skis. Team France has six athletes and 52 skis among them. For the French team ski tech, Egon Griot, this means working five to six hours each night to prepare the skis, and even more time ahead of the speed events.

“If there is speed, speed is more. I don’t look at the time too much,” Griot said. “The speed events take more time because you put on different wax. For GS you can get maybe just one, or two coats. For the speed, sometimes there are four kinds of wax. You put one on, wait, wait, wait, and then take it off. You put on another one, and wait, wait, wait.”

The ski techs begin their long evenings by sharpening the edges of the skis, sanding them, and polishing the skis all along their bases. They then put on a hot base wax, let it cool for an hour, and pour on the racing wax.

The techs prepare two identical sets of skis, but only one - with the least amount of scratches - will be used for racing while the other is demoted to the warm-up and course inspection.

The choice of wax is a fine science that considers a plethora of factors, such as snow conditions, temperature and the athlete’s skiing style. Doubling as meteorologists, ski techs can be seen prowling the course before a race and testing the snow with special tools.

“We have a device that we put in the snow and we look at the temperature and the humidity,” Griot said. “We take this information and prepare the ski different if the snow is cold and we do it in another way when the snow is very, very warm.”

Minutes before the race, the ski techs are at the starting gates to check the bindings and apply the last coat of wax - a light spray - on the skis to give the athletes that extra push.

“It’s all in the first couple of metres, getting out of the gate, because after that gravity takes hold,” said Great Britain’s assistant coach and ski waxer Hammy Morison. “As long as you are skiing properly and using the right technique, you will get the maximum out of your skis. What we do is we make sure the athletes get up to speed as soon as possible. It’s all for the acceleration of the ski. It’s more important when it’s in the speed races rather than the tech races, but it’s still important to get up to speed.”

Another quick coat of spray wax is applied to the skis before the second run since the athletes tend to use the same pair for the entire competition.

To compare, amateur skiers will probably not have their skis prepped so meticulously, if at all, in their entire lifetimes.

“Never, never,” Morison said. “You would never put an edge like this on an average person’s ski because it’s only for people who can put the skis on this edge, come into the turn and want a grippy ski. And most people won’t ski on ice, the slopes that we ski on.”

Celebrations in the ‘grotto’

Often cold, industrial and - in the case of the 2019 Worlds co-hosts Kranjska Gora and Sella Nevea - located underground, the ski wax rooms are not the most cheerful places to be at a ski resort. Ski techs also have to make the sacrifice of spending the vast majority of the year on the road with the teams and away from their families.

But for the die-hard enthusiasts of the sport, there is no other way to live.

The feeling when their athlete crosses the finish line first cannot be matched for the men who toil away their evenings and nights making sure the skis go as fast as possible.

“I’m over the moon when my athletes win,” Morison said. “We’re all ski racers at heart. We came from ski racing and we have that competitiveness. That’s what we like, and when your skier stands on the podium it’s like yes, yes, yes! It is such a rush.”

“Everything. I like everything,” Griot said. “I love my job.”