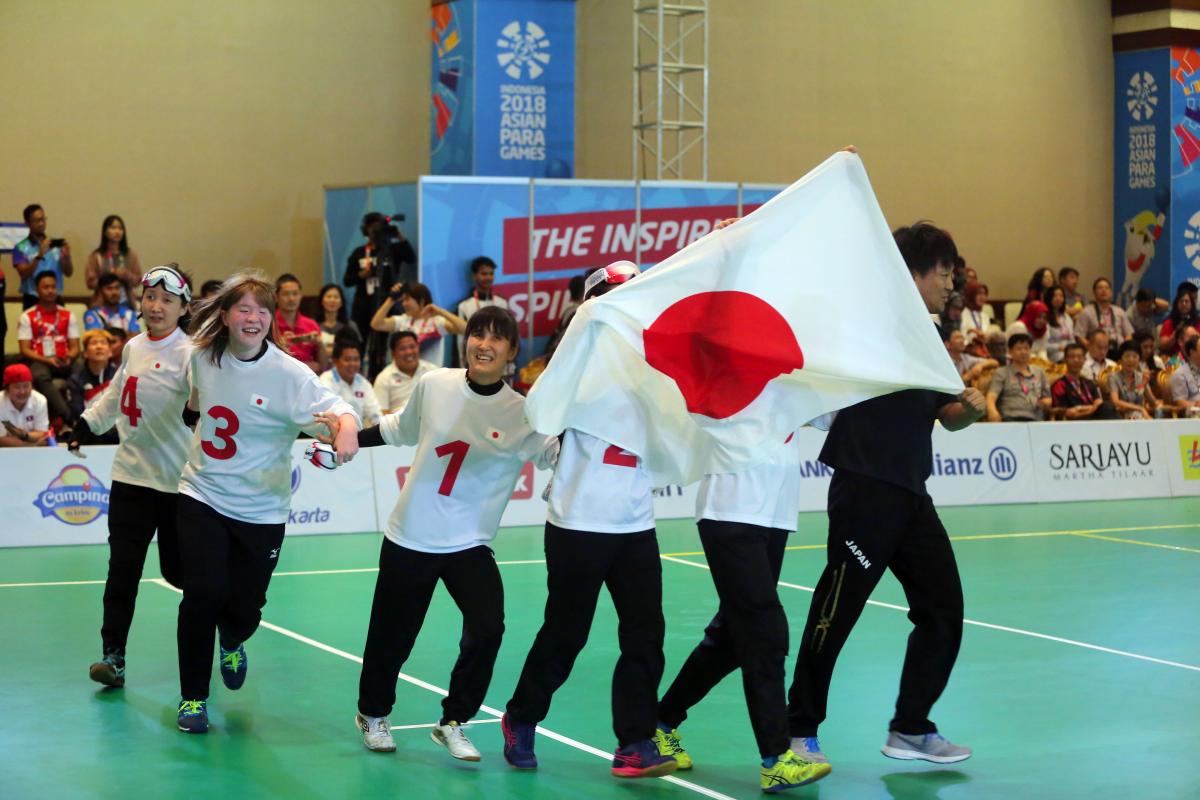 ⒸANAPGOC
By Priyanka Sharma | For the IPC and APC

It was heartbreak for China at the Balai Kartini Hall on Friday (12 October), as Iran and Japan claimed gold at the goalball competitions of the Indonesia 2018 Asian Para Games.

China had to settle for silver in both the men’s and women’s events, despite consistent performances and vocal support from their fans.

Defence was the key to victory for Iran and Japan. For Iran, it was their all-round game that helped them defend their title in style, while the women’s gold was all the more special for Japan as it was their first at the Asian Para Games.

South Korea took the men’s bronze, beating Japan 8-3, while Iran overcame Thailand for the third place in the women’s competition.

Japan dominated proceedings right from the outset. They went 1-0 up in the first minute and quickly doubled the lead. China fought back to break the strong Japanese defence to make it 2-1 at half-time.

China started the second half the stronger team, and some neat attacking play saw them level the scores at 2-2. But it was the push Japan needed to take control, scoring three unanswered points to make it 5-2. Although China pulled a goal back in the final minute it was not enough, and the match ended 5-3 in Japan’s favour.

“Since the time we came here, we targeted the gold. And this is special for us. We had the motivation to win the final today as this is for our Tokyo 2020 preparation,” said Japan coach Kyoichi Ichikawa.

“I am happy for the team but we need to still fix some of their mistakes ahead of other competitions.”

Amid loud cheers, the men’s final witnessed many exciting moments in a fast-paced game.

China were quick to take the first point as Iran took some time to get into their groove. But once they did, Iran sizzled at the Balai Kartini Hall treating the fans to some great play. The scorecard started ticking in quick succession and at half-time, Iran led 4-2. They came back even stronger after the break and widened the margin to 6-2, before China enthralled the fans with a beautiful goal.

It was not to be the start of a comeback though, and Iran claimed two more goals to complete an emphatic 8-3 win. The Iranian players celebrated wildly, joined by their female counterparts. Iran coach Nabati Mehdi was a content man and hailed his team for an excellent show. “It’s a very happy moment for us. The boys played very well. They met our expectations.”

“China is a very strong team, so we had plans to tackle them. Good planning and analysis of their game helped us beat them. The training was planned keeping in mind the stronger teams like China here,” Mehdi said, adding that the team’s next target is to secure qualification for the Tokyo 2020 Paralympics.

Asked about the secret behind the strong overall game of the team, the coach added: “We had focused on our defense during trainings and the boys’ unity, good relations with each other and their spirit helped us to cover all aspect of the game.”